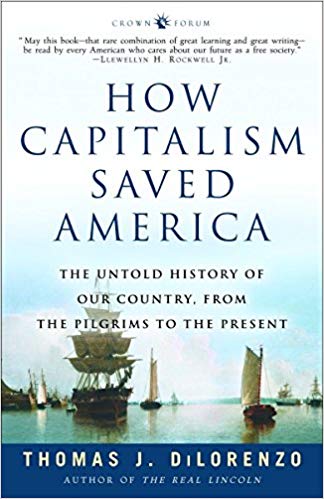 Whether it’s Michael Moore or the New York Times, Hollywood or academia, a growing segment in America is waging a war on capitalism. We hear that greedy plutocrats exploit the American public; that capitalism harms consumers, the working class, and the environment; that the government needs to rein in capitalism; and on and on. Anticapitalist critiques have only grown more fevered in the wake of corporate scandals like Enron and WorldCom. Indeed, the 2004 presidential campaign has brought frequent calls to re-regulate the American economy.

But the anticapitalist arguments are pure bunk, as Thomas J. DiLorenzo reveals in How Capitalism Saved America. DiLorenzo, a professor of economics, shows how capitalism has made America the most prosperous nation on earth—and how the sort of government regulation that politicians and pundits endorse has hindered economic growth, caused higher unemployment, raised prices, and created many other problems. He propels the reader along with a fresh and compelling look at critical events in American history—covering everything from the Pilgrims to Bill Gates.

And just as he did in his last book, The Real Lincoln, DiLorenzo explodes numerous myths that have become conventional wisdom.